Dot Howard and I were awarded a-n’s NAN Artists New Collaborations Bursary in April this year. We have established a collective called other/other/other to cater for alternative practices in Norwich, and also begun joint research projects into spaces, surfaces and scale. On May 10th we ventured into Norwich’s Castle Mall to record our movements through this weird space. Dot taped a camera to her leg so that it only filmed her shoe and the fluctuating floor surfaces as she walked. I taped a contact mic to the end of a bamboo cane and dragged it along the floor at the same time, picking up the variation in textures. We recently did some more experiments in the mall, exploring a fire escape in the car park. This will be an ongoing project.

Visit my a-n blog for more information, and see our collective blog, other/other/other.

One minute audio extract, dragging the stick over the anti-slip strips at the exit of the mall:

“Species of Spaces”, Picnic in the Church, Colchester, 27th September 2008

See the an blog for more detail. 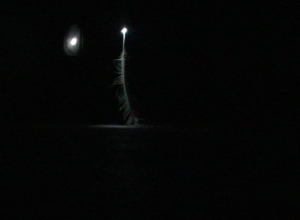 We have performed this piece three times now. The first outing was at the Picnic in the Church in Colchester, the second was at an o/o/o platform event at Norwich Arts Centre (where we crawled under the stage), and the third at The Late Shift. It is the first time either of us has had a repeatable performance, and the key thing is that it remains true to our concerns of site-specificity every time we perform it in a new space.