In June I spent two intensive days at Wensum Lodge in Norwich making work and running workshops. I was fortunate enough to be allowed to use the shooting gallery for recording and installation. It is an underground, crypt-like space, with damp walls and good acoustics, and is ironically also used to store the unfired ceramics from the art classes on the floor above. There are tiny gold shells all over the place which I used in many of my recordings. There were four aisles so I decided to install a recording at the end of each to exploit the acoustic properties of the space, and create a fluctuating audio environment depending on where the listener stood. The first aisle contained a loop of water dripping directly onto a contact mic, recorded in an art studio upstairs. The second was a loop of shells being dropped onto a metal target. The third was the sound of a contact mic being dragged along the path of a fired bullet to the end of the aisle. The fourth aisle contained a recording of the sculptors in the room above, thumping and hammering. Together, the piece sounded like gunfire and drums.

It was a great opportunity to be able to make a site-specific installation in such an evocative space.

Here is a 3m50s audio recording (in stereo if you have headphones) which follows the sounds as I walk into each of the aisles as described above: 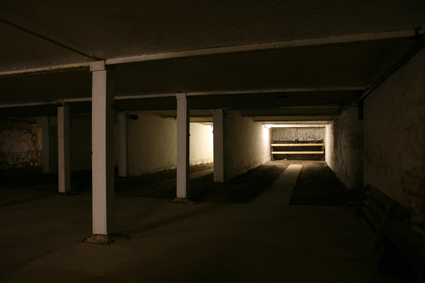